This paper reviews the physicochemical properties, classification characteristics, means of identification, and association with tumors of alpha-fetoprotein (AFP), a specific protein component of fetal serum also produced by hepatocellular carcinoma and germinal teratocarcinomas of the ovary and testis. The appearance of AFP and its dynamics in patient blood serum are widely used for diagnosis and monitoring these cancer forms. [The SCI® indicates that this paper has been cited in over 710 publications.]

The studies reviewed in the paper were based on two original observations – ours, which demonstrated alpha-fetoprotein (AFP) production by mouse hepatomas,1 and the study by Y.S. Tatarinov2 that found an AFP-like antigen in the blood serum of a patient with primary liver cancer.

After these works were published I continued studying AFP with a small group of coworkers, paying close attention to the problem of its regulation in normal and malignant conditions. However, in 1965 I also began parallel investigations on membrane antigens of virus-induced mouse leukemia. These antigens seemed at that time to be the simplest and most easily understood systems for analyzing the nature and origin of tumor-specific antigens. At the same time, we broadened the AFP study to also include clinical aspects.

Thus, in the autumn of 1969 when I received an invitation from George Klein to prepare a review for Advances in Cancer Research, I suggested either AFP or antigens of mouse leukoses as the topic. Klein preferred AFP, so the next year I started to collect materials for the review while working simultaneously in the laboratory. However, in the spring of 1970 I realized that the work was progressing too slowly to be ready by that November.

From the end of April and for the following four months, I was completely absorbed with the review. I often worried about how it would affect my work to be away from the laboratory for such a long time. I was not sure that the review would be read even by a few people, that it would help anybody approach the problem, or that it would influence the development of the field. I really hoped that the review would be influential, however, but the manuscript seemed too cumbersome, hardly readable, and rather unsuccessful. Nevertheless I became more and more engrossed in this work because it allowed me to formulate over 30 concrete questions for experimental study. The review also served as a turning point for me in my investigations of that time – I understood clearly that it would hardly be possible to divide my research into two parts; the AFP study needed my undivided attention. After I finished writing the review, I focused my attention completely on AFP and on the questions formulated in the review.

The following years allowed me to answer almost all of these questions. They provided knowledge and a rational background for clinical use of AFP3 and also allowed the formulation of the concept of "structural repression" as the critical factor in the regulation of AFP-synthesis.4

Frequent citation of the review is in my opinion due to its publication at the proper time and in the proper place. It appeared just when interest in AFP entered the phase of exponential growth, and it was published in a "popular" journal. Of course, I would like to think, that its frequent citation is due to the problems that are formulated in it, in addition to the convenience it provides in reviewing the early literature on AFP. But this type of analysis is not easily performed.

In recognition of my investigations on AFP, I was awarded the first Award on Tumor Immunology by the New York Institute for Cancer Research (1975), an "Outstanding Scientist Award" from the International Research Group for Carcinoembryonic Proteins (1976), and, together with Tatarinov, the USSR State Prize (1978). 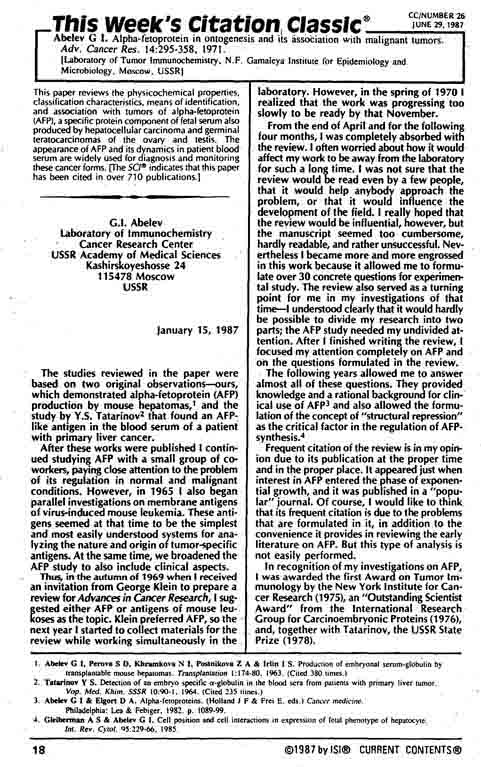