Department of Immunology and Oncology
Gamaleya Institute of Epidemiology and Microbiology
Moscow, U.S.S.R.

Our experiments were carried out mainly with hepatoma strain XXIIa; this tumor was induced in 1951 in C3H-A mice by the action of orthoaminoazotoluene, and it has been maintained within the same line of mice (7). Three other hepatoma strains were originally induced by the same carcinogen in the same line of animals: strain XXII is the substrain of XXIIa, strain XXXVIII was induced in 1960, and hepatoma XLVI in 1961 (8).

Two antisera against newborn mouse sera (anti-NB) were obtained by immunization of rabbits as follows: 3 injections, each consisting of 3 ml, were given at intervals of two and one weeks, respectively; the first of these injections was with complete Freund's adjuvant and the other two without it. Blood was taken one week after the last injection. Two sera against adult mouse serum (anti-AS) were prepared in the same way. The preparation of antihepatoma sera has been described previously (1, 13). All analyses were performed by the agar-precipitation microtechnique (10) and by the immunoelectrophoresis method (9) in semi-micro-modification (2, 12).

The presence of the specific antigenic component in the sera of newborn mice and its estimation in different systems was carried out in the following way. The anti-NB-serum was absorbed by an equal volume of adult mouse serum (AS) and after discarding the precipitate formed, it was tested with different dilutions of newborn mouse sera (NB). The precipitin line which occurred in this system was formed by the NB-dilutions up to 1/2000. The optimal reaction was seen between absorbed anti-NB and NB diluted 1/256. These components formed the standard test system used for further investigations. In each experiment the above test system was compared with a series of two-fold dilutions of the system to be tested (Fig. la-d). It was possible in this way to reveal the presence of a certain antigen in the systems compared, as well as to determine the end-point of titration of this component in different systems. Figure 2 presents the summarized data concerning the determination of this antigen in the sera of mouse embryos (second part of pregnancy) and of newborn and postnatal mice up to adult life, and also in the sera of adult mice grafted with hepatoma XXIIa (14-21 days after transplantation). All data were obtained with the same standard test system. The levels of the antigen studied were given in arbitrary units. 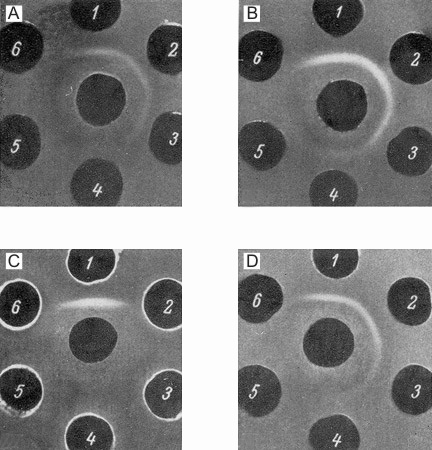 The inverse value of the end-point of titration of the embryo serum was taken as 100%. From 2 to 14 individual sera were used for each determination and average values are given in Figure 2. The data on embryo and NB sera were obtained on the serum pool from 9 and 40 animals, respectively. Embryo serum gave a precipitin line up to a dilution of 1/1000. The negative results obtained with the sera of adult mice therefore mean that the component studied is absent, or present in concentrations lower than 0.025% of its level in embryo sera.

From the data presented in Figure 2 it is obvious that the concentration of the antigen studied gradually decreases during the first three weeks after birth and that, subsequently, this antigen disappears from the sera. The antigen is present in all mouse lines tested and its presence depends only on the age of the animals. A significant accumulation of the antigen was obtained in the sera of tumor-bearing mice after the transplantation of hepatoma XXIIa. 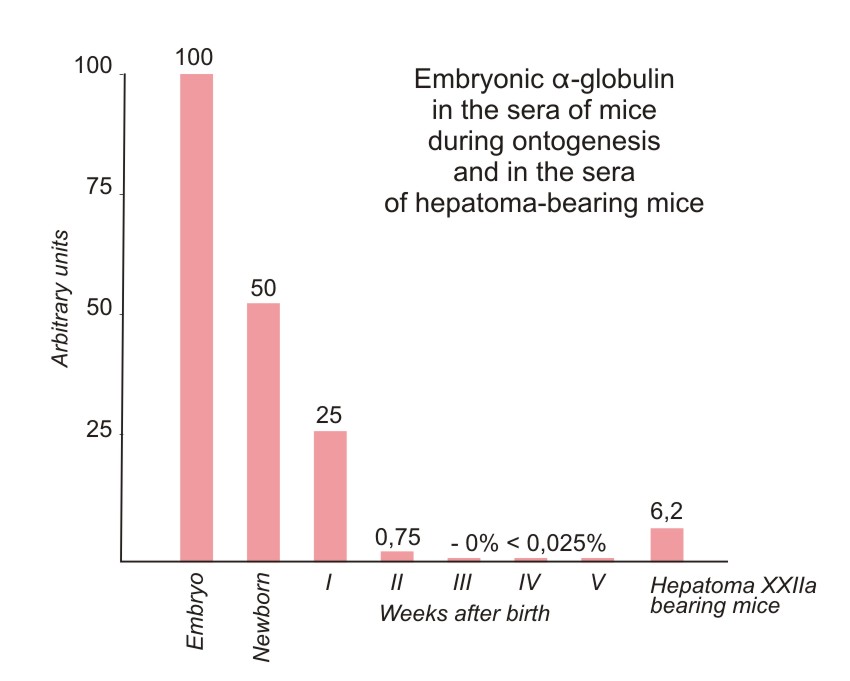 To carry out a more thorough comparison of the antigens detected in the embryo sera and in the sera of hepatoma-bearing mice the isolation of the antigen from both sources as well as from hepatoma extract was performed. Two ml of NB were subjected to electrophoresis in agar-gel (agar-block dimensions, 15 X 11 X 1 cm; barbituric acid-sodium barbiturate buffer at pH 8.6; ionic strength (μ) = 0.025) at the gradient potential 4v/cm during 6 hours) in the apparatus described previously (12). The fraction containing the antigen studied after electrophoresis was located in the α-globulin region and after elution from the agar sections (12) contained the characteristic antigen together with some other antigens common for NB and AS. For the elimination of these admixtures the immunofiltration method (2,3) was used: the α-globulin fraction of NB or of the sera of hepatoma-bearing mice was again subjected to electrophoresis in agar, but in this case the γ-globulin fraction from the anti-AS was placed in the pathway of antigen migration. During electrophoresis the antigens with anodic mobility met the γ-globulins which moved by electro-osmosis in the opposite direction. The components reacting with anti-AS antibodies were precipitated while the specific antigen of NB serum passed the antibody "filter" without changing its mobility and could therefore be eluted from the agar in immunologically pure form. The detailed description of this technique has been given elsewhere (2, 12). When isolating the antigen from the extract of hepatoma XXIIa the mixture of anti-AS and anti-liver sera was used as a specific "filter". 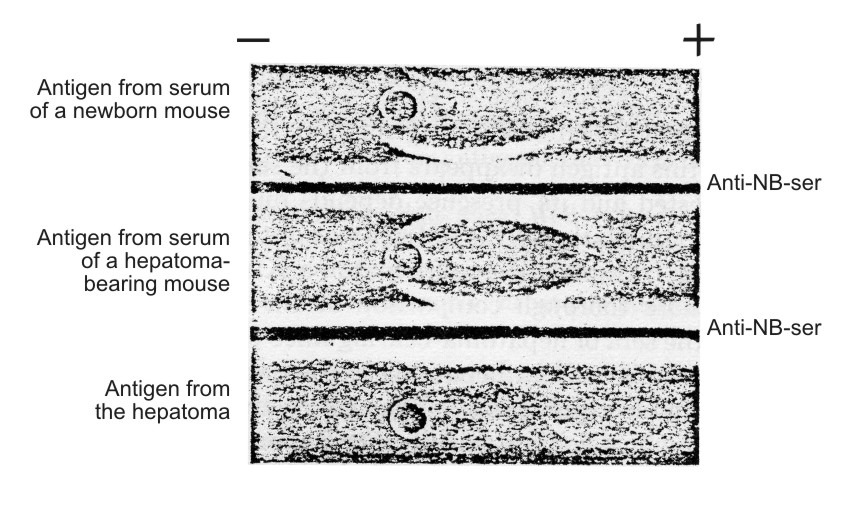 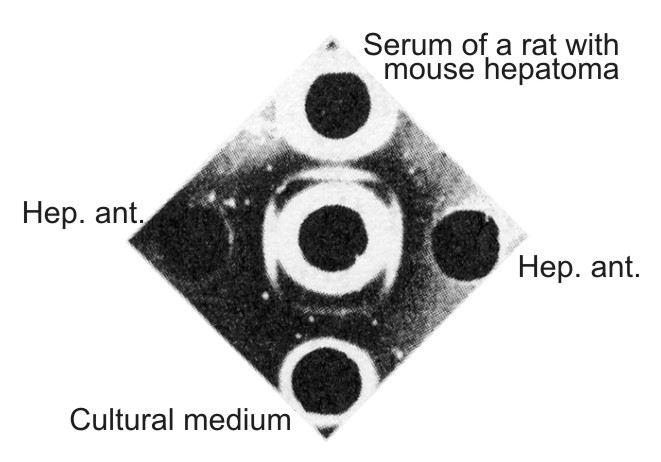 The next and most important problem was connected with the determination of the site of origin of the antigen in the hepatoma-bearing mice. Since the level of the antigen in the blood of the hepatoma-bearing animals was several times higher than in tumor extract the question arises: is it formed in the tumor itself or does it merely accumulate in the tumor after being formed in some other tissue as a responce to the tumor graft? The latter possibility seemed plausible because there are many studies demonstrating some changes in the α-globulins connected with tumor growth (4, 5, 6). To detect the site of antigen production, experiments with heterotransplantation of mouse hepatoma into cortisone-treated rats and cultivation of tumor tissue in vitro were performed. In both cases formation and secretion of mouse hepatoma antigen were demonstrated.

The antigen found in the sera of rats grafted with mouse hepatoma and in tissue culture medium were serologically identical with the characteristic antigen present in mouse hepatoma extract (Fig. 6) or in NB sera. In primary tissue cultures, continuing accumulation of the antigen in the medium which paralleled the growth of monolayer was demonstrated. Moreover, we now have at our disposal the fifth generation of tissue culture originally derived from the ascitic subline of (XXIIa) hepatoma which retained the ability for active production of embryonal α-globulin as well as of mouse serum albumin. Thus it seems that the embryonal α-globulin which appeared in the blood of hepatoma-bearing mice is formed in the tumor and then secreted into the blood.

We also investigated the sera of: a) mice grafted with three other slowly growing hepatoma strains (XXII, XXXVIII and XLVI)*; b) partially hepatectomised mice; and c) mice grafted with 20 different non-hepatic tumors. This last group included such tumors as the Ehrlich carcinoma, the Crocker and 37 sarcomas, several sarcoma strains induced by methylcholanthrene and benz-anthracene, 5 transplantable leukoses, 2 mammary gland tumors, one stomach tumor and two skin carcinomas. One or two sera from individual mice with each kind of tumor were tested. Slight accumulation of the antigen was demonstrated in sera of mice with slowly growing hepatomas (XXII and XXXVIII) and in the serum of mice with regenerating liver 48 hours after the operation (Fig. 7). One hepatoma (XLVI) and all the non-hepatic tumors gave negative results. 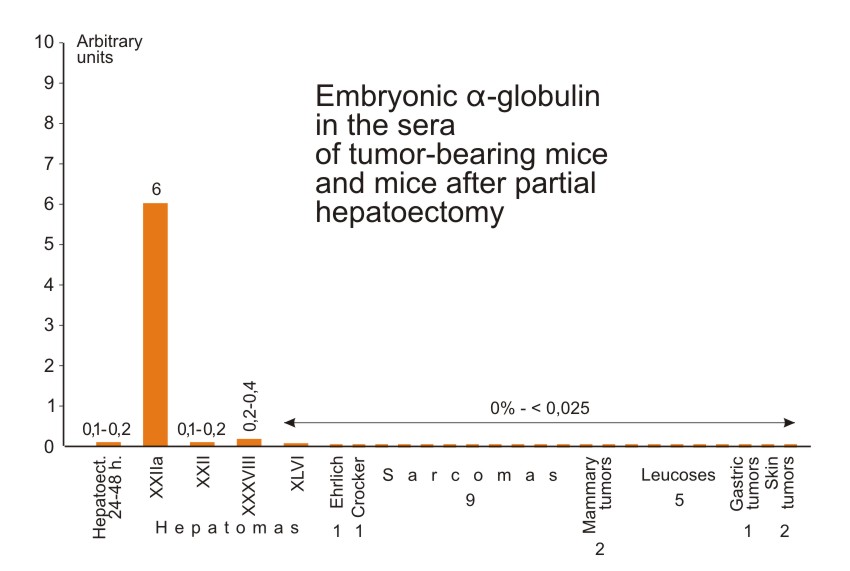 The production of embryonal α-globulin was therefore observed only when proliferation of normal or malignant hepatic cells was taking place. We had the impression that the production of antigen was proportional to the growth rate of hepatoma tissue. Thus, the antigen previously found in mouse hepatoma is not a new substance unique for malignant tissue. The mechanism of its synthesis is present but it is repressed in normal liver cells, and activation of this mechanism takes place in some transplantable hepatic tumors. This activation is probably caused by the transition of tissue from the resting state to proliferation.

By using similar techniques it was possible to demonstrate a similar (but rat-specific) α-globulin in the sera of newborn rats which could not be detected in the sera of adult rats but which accumulated in ascitic fluid and in the sera of adult rats grafted with rapidly growing ascitic rat hepatoma (hepatoma Zajdela). Thus it may suggested that the phenomenon described is common to different transplantable hepatomas of mice and rats. Further work on the study of the substances and the phenomenon described is in progress. 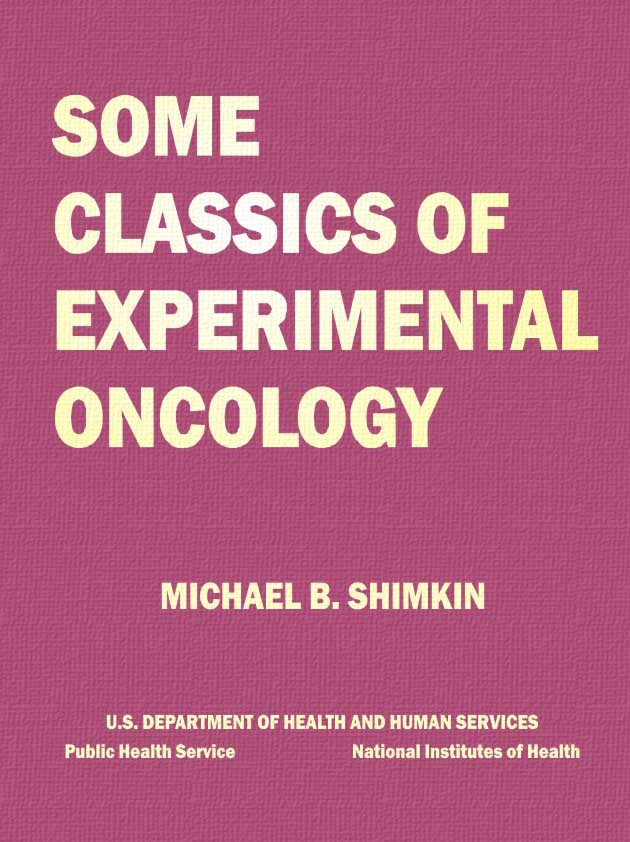 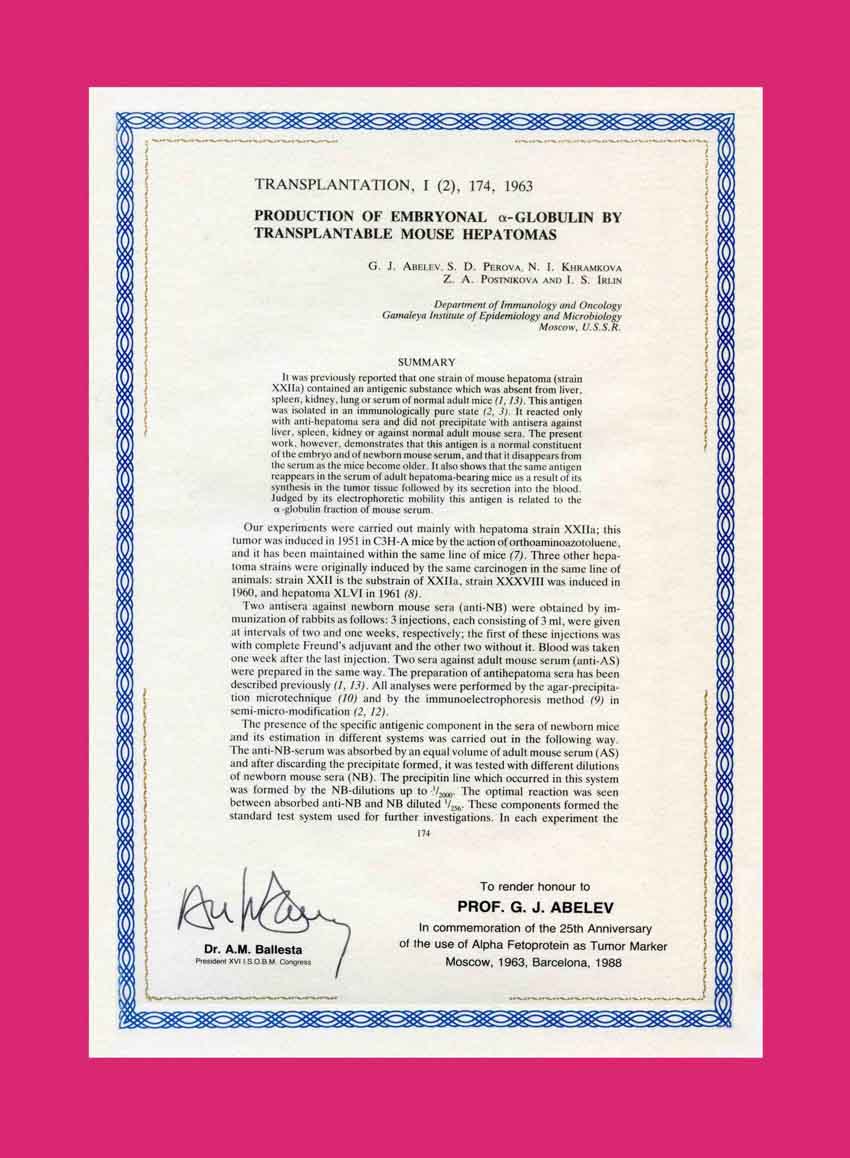