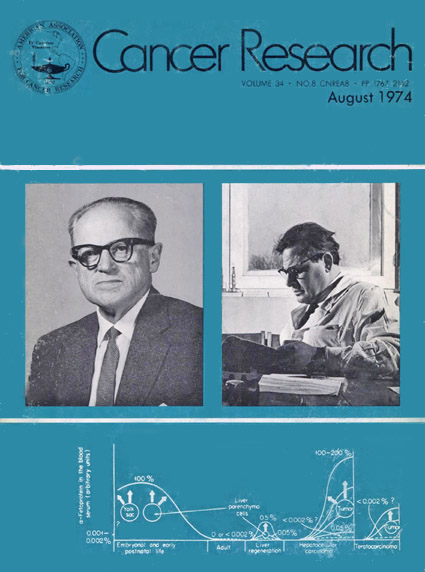 Lev Alexandrovich Zilber (1894–1966), doctor of medical sciences and member of the U.S.S.R. Academy of Medical Sciences, was the founder of the Russian school of viral oncology. A graduate of Moscow State University in 1919, his earlier experimental work was on auto-serotherapy of typhus (1921), hereditary transformation of serotypes in Proteus vulgaris (1922–1923), and the replication of viruses in unnatural hosts, as vaccinia virus in yeast (1932–1934). He and his co-workers identified the tick-borne, summer-spring encephalitis of the Far East regions of the U.S.S.R. He began work on the virological aspects of cancer in 1944, heading the Department of Immunology and Virology of Tumors at the Gamaleya Institute of Epidemiology and Microbiology, Moscow. [N. F. Gamaleya (1859–1949), after whom the Institute is named, was a bacteriologist who, following a visit with Pasteur in 1896, introduced rabies vaccination in Russia.]

G. I. Abelev (b. 1928) doctor of biological sciences and professor of biochemistry, graduated from Moscow State University in 1950. He was an assistant of Dr. Zilber, whom he succeeded as departmental chairman at the Gamaleya Institute in 1966. Abelev and his colleagues devoted their attention to tumor-specific antigens and demonstrated striking immunological individuality in mouse hepatomas (cf, Progr. Exptl. Tumor Res., 7: 104, 1965).

The most important contribution from Abelev's group was the 1963 discovery of embryo-specific α-globulin (α-fetoprotein, or AFP) in experimental hepatomas. This led to the development of an immuno-diagnostic test for hepatocellular carcinoma and teratocarcinoma in man. The work is reviewed in Advan. Cancer Res., 14: 295, 1971. The figure is from this article and is a schematic representation of AFP synthesis in normal development and pathological states (solid line, serum AFP levels in arbitrary units; broken line, expected AFP level).

We are indebted to Dr. Lev L. Kisselev for the portraits of Zilber (left) and Abelev (right). 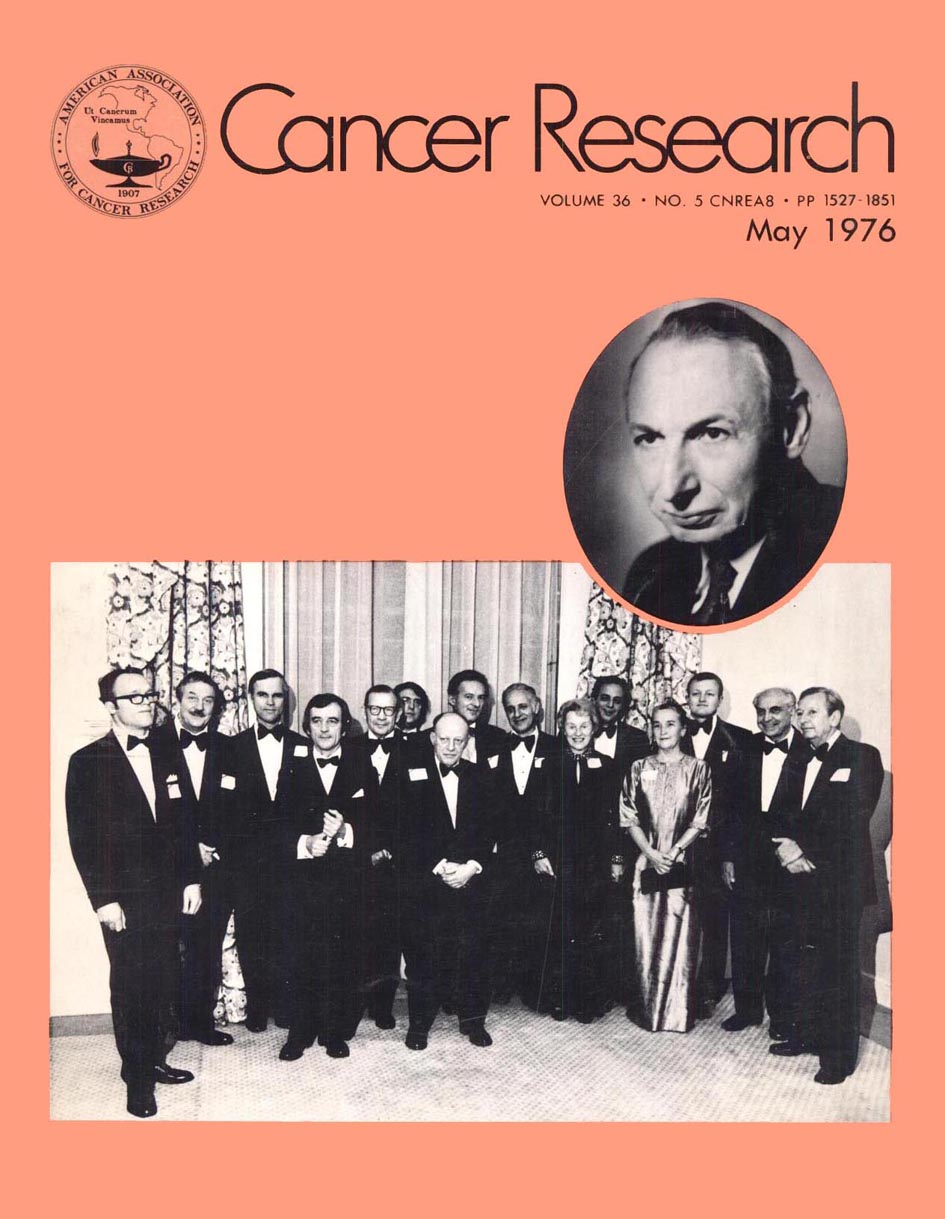 On October 20, 1975, a ceremony was held in New York City, under the auspices of the Cancer Research Institute of New York, honoring 15 scientists for their pioneer contributions to the field of cancer immunology. The recognitions were as follows:

Hans O. Sjogren (University of Lund, Lund, Sweden). For demonstrating that tumor viruses can impart antigens to the surface of cells that they render cancerous, and so render them immunologically foreign.

Garri I. Abelev (Gamaleya Institute of Epidemiology and Microbiology, Moscow, USSR). For the discovery that antigens that are normally evident only in the embryo may reappear in cancer (fetoproteins).

Robert J. Huebner (National Cancer Institute, Bethesda, Maryland). For the recognition that viral antigens may persist in animal cancers from which the causative virus itself can no longer be recovered (T-antigens).

Donald L. Morton (School of Medicine, University of California, Los Angeles, California). For studies on immunological tolerance and for clinical observations that relate immune capacity of cancer patients to their prognosis.

Robert A. Good (Sloan-Kettering Institute for Cancer Research, New York, New York). For research on the immune deficiencies of cancer patients and the increased incidence of certain tumors in immunologically deficient patients.

Werner and Gertrude Henle (Children's Hospital, Philadelphia, Pennsylvania). For immunological research that elucidated the relation of the Epstein-Barr herpesvirus to Burkitt's lymphoma and to the self-limiting proliferative disease, infectious mononucleosis.

George and Eva Klein (Karolinska Institutet, Stockholm, Sweden). For discoveries of tumor-specific antigens in the mouse, to the most comprehensive immunological analysis of a human cancer, Burkitt's lymphoma.

Edward A. Boyse and Lloyd J. Old (Sloan-Kettering Institute for Cancer Research, New York, New York). For studies on the antigenic composition of normal and malignant cells, and the way in which this is governed by cellular and viral genes.

In addition, a posthumous award was given to Peter A. Gorer (1907-1961) of England, for his basic work on the immunogenetic analysis of the mouse. A special William B. Coley Memorial Award was presented to Helen C. Nauts, Executive Director of the Cancer Research Institute of New York.

Not present were Dr. Garri Abelev and Dr. Eva Klein.

We are indebted to Dr. Lloyd J. Old and John Ott, Coley, Ott Associates, for the group photograph and information.

The photograph of Peter Gorer is reproduced by permission from Jan Klein, Biology of the Mouse Histocompatibility-2 Complex. New York: Springer-Verlag, 1975. An appreciation of Gorer by P. B. Medawar appears in "Biographical Memoirs of Fellows of the Royal Society," 7: 95-109, 1961. 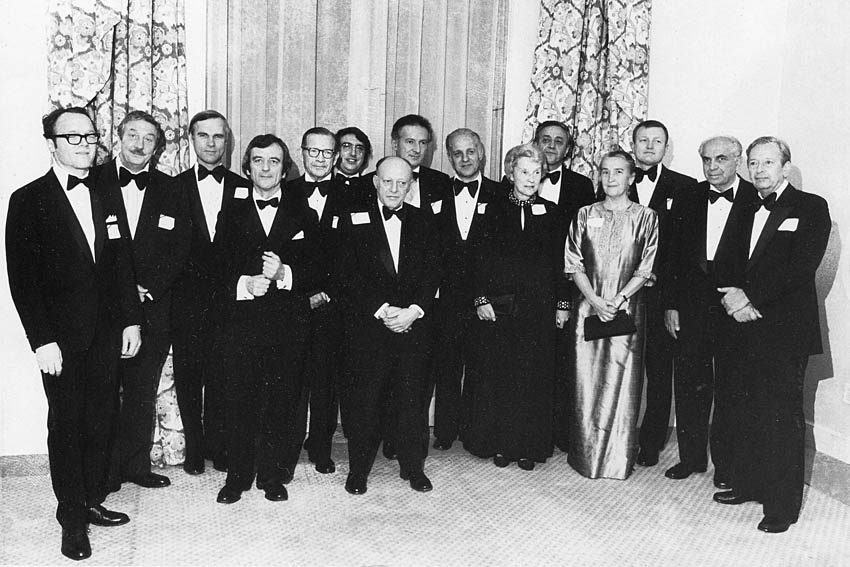 Not present were Dr. Garri Abelev and Dr. Eva Klein. 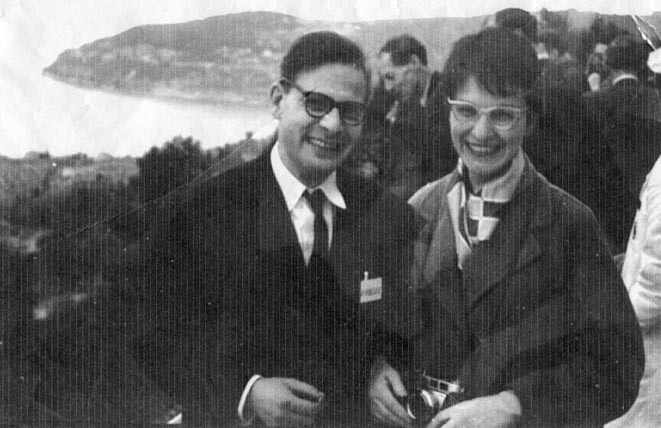