Alpha-foetoprotein (AFP) is one of the most distinct and well-defined biological markers of certain tumours. Its presence in adult serum is evidence of hepatocellular carcinoma (HC) or teratocarcinoma of the ovary and testis (TC). AFP can be used as a specific diagnostic indicator of these tumours, and, since there is usually a correlation between AFP dynamics in the patients' blood and tumour progression or regression, it can be employed to monitor the effectiveness of treatment. The clinical and biological aspects of the problem have been discussed in a number of recent reviews and, consequently, the aim of this article is to briefly summarize the present state of knowledge and to outline some further problems.

AFP is a specific protein of embryonal and foetal serum in mammals and, according to the definition given by a group of WHO experts: "AFP is the first α-globulin to appear in the mammalian sera during embryonic development and the dominant serum protein in early life". The AFP level in foetal blood is 4-5 mg/1 but during development, the concentration gradually falls. The background level in the adult body is 2-15 ng/ml.

AFP is a well-characterized protein, with a molecular weight of about 70,000, and it comprises a single polypeptide chain; its physicochemical properties are very close to those of serum albumin.

The function of AFP has not yet been established but it may be supposed that in early foetal serum, AFP acts as an albumin substitute, with osmosis and transport functions, since the blood AFP level is several times higher than the blood albumin level during this period. AFP selectively binds oestrogens and is likely to take part in their catobolism in the foetus. There are indications that AFP suppresses lymphocyte activity and that it may be one of the factors that retards the process of immunological maturity.

The dynamics of AFP in ontogenesis and the localization of AFP synthesis in the embryo have been better elucidated, and the findings provide an explanation as to why AFP production is resumed in HC and TC.

AFP synthesis starts at the same time as embryonic haemopoeisis. In the yolk-sac visceral endoderm, where the first blood islets are formed, AFP is synthesised and secreted into the embryo blood. The liver, once formed, becomes the main organ of haemopoeisis and the principal source of AFP in the embryo. During this period, foetal hepatocytes are responsible for AFP synthesis. As the process of liver haemopoeisis begins to fade and hepatocytes progressively differentiate, AFP synthesis ceases or, to be more precise, falls, in adults, to between one hundred thousandth and one millionth of its maximal value. Very small quantities of AFP are synthesised in the foetal gut which is genetically related to both the yolk sac endoderm and the liver. In adults, AFP synthesis is temporarily and reversibly resumed in the regenerating liver. The AFP level in this case is between one hundredth and one ten thousandth of its maximal value in foetal serum. Regeneration of the liver, caused by hepatotaxic carcinogens is accompanied by a sharp outburst of AFP production, at a level several orders of magnitude higher than that in physiological regeneration. The special characteristics that distinguish AFP-synthesising hepatocytes from other hepatocytes are, as yet, unclear. However, it is important to know which cell types actually produce AFP in the normal liver and in liver tumours. Comparison of the dynamics of AFP synthesis during the acute phase of chemical hepatocarcinogenesis with the population dynamics of different cell types in the liver, has suggested that AFP is synthesised by cells which are transitional from oval cells to small hepatocytes. In this case, the oval cells are considered to be the precursor cells for the small hepatocytes. Direct observations have also been made of AFP localization within the oval cells and the transitional forms, but the findings are at variance with certain other data, and the problem of the identification of AFP-producing liver cells still remains open.

A marked resumption of AFP synthesis is observed in cases of HC and germinogeneic TC. These are the very forms of cancer in which tumours contain components analogous to those that synthesize AFP in the normal body. In TC, the component is the yolk sac endoderm and its derivatives. Data on direct immunofluorescent localization of AFP in mouse TC provide immediate proof of this statement. In HC, these components are certainly, as yet unidentified, analogues of foetal hepatocytes. Childhood hepatoblastomas, consisting of malignant hepatocytes of the foetal type, are the strongest producers of AFP. It should be emphasized that production of AFP by the tumour itself has been proved by direct experiments with tumours of both types.

Temporary resumption of AFP synthesis occurs in some cases (10-15%) of viral hepatitis. The very low levels of AFP and the reversibility of the synthesis support the assumption that active liver regeneration is responsible for this phenomenon.

Another instance in which AFP synthesis is resumed is secondary liver cancer caused, as a rule, by metastases of gastro-intestinal tumours; however, the quantities synthesized are usually smaller, and less than 15% of cases are involved. It is not yet clear whether the resumption of the synthesis is brought about by liver damage followed by regeneration or if AFP is produced by the metastases themselves. In this case, it should be born in mind that the foetal intestine is capable of synthesizing trace quantities of AFP. In cases of tumours with no liver metastases and in other non-cancerous diseases, AFP is virtually undetectable in the blood. Exceptions to this rule are, however, a number of children's diseases which are, most probably, accompanied by inter alia incomplete maturity of the liver. These diseases include Indian juvenile cirrhosis, con-gential tyrosinaemia and ataxia telangiectasia. Intense synthesis of AFP is observed in a significant proportion of patients with these diseases.

The value of AFP determination as a diagnostic test for specific cancer types is obviously dependent on the sensitivity of the AFP detection technique. (Figure 1 shows the frequency distribution of patients with various diagnoses, in relation to their serum AFP level.)

The curves are constructed from data obtained in a study of patients in Moscow. These data agree with similar data for European and USA patients, but differ from those for world regions with the highest prevalence of HC. An analysis of the curves demonstrates clearly that "the specificity threshold" for HC diagnosis coincides with the sensitivity limit of gel-precipitation analysis – currently, the standard AFP test method (Table 1). However, any further increase in the sensitivity of AFP determination techniques will increase not only the percentage of detectable HC but also the number of "false-positive" reactions. The situation is quite different in the diagnosis of testicular TC: the use of more sensitive methods doubles effectiveness of the test (from 45% to 90%), whilst viral hepatitis and metastatic liver cancer, which account for up to 10-15 % of cases "captured" by the above-mentioned methods, can be ruled out easily on the basis of clinical data. 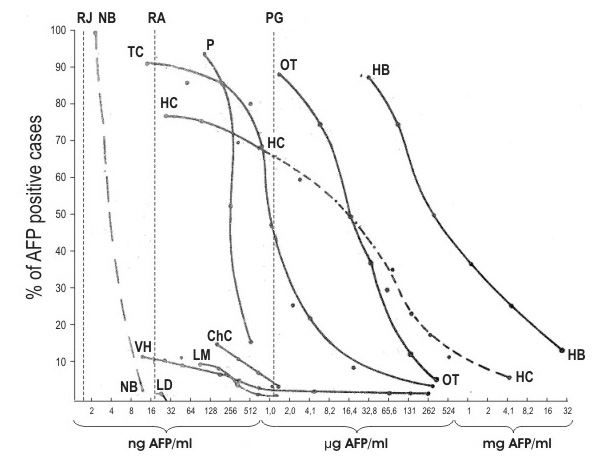 The broken line is the hypothetical portion of the curve, for which insufficient comparable data are available.

Table 1.
A summary of published data on cases of hepatocellular carcinoma,
teratocarcinoma and other neoplastic and non-neoplastic diseases
and the number and percentage of these cases found to be AFP-positive
using gel-precipitation techniques (up to 1972).

It is particularly significant that AFP levels in individual patients with testicular TC are, in most cases, approximately correlated to tumour size. Thus, knowledge of blood AFP dynamics makes it possible to estimate promptly the effect of surgery or chemotherapy.

The AFP test is already widely employed in clinical practice for the diagnosis of HC and TC, and adoption of high-sensitivity AFP determination techniques, such as radioimmunoassay or radioimmunodiffusion, will considerably augment the test's diagnostic and prognostic value. The use of the AFP test for the cancer screening of populations or population groups with a high-risk for HC has confirmed that it is possible to detect this disease in the early stages, and even when it is still operable.

Immunotherapy of liver cancer based on immunological reactions to AFP is now being actively investigated in experimental models. Normal adult animals are tolerant to AFP, and it does not stimulate the production of antibodies in the host organism. However, this tolerance can be overcome by immunizing animals with cross-reacting AFP from other species, for instance, by immunizing rats with mouse AFP; in this case, immunization also stimulates the production of rat-AFP antibodies.

Clearly, an extremely important line of research is to ascertain whether the anti-AFP immune response would suppress hepatocarcinogenesis or inhibit the growth of established AFP-positive hepatomas. 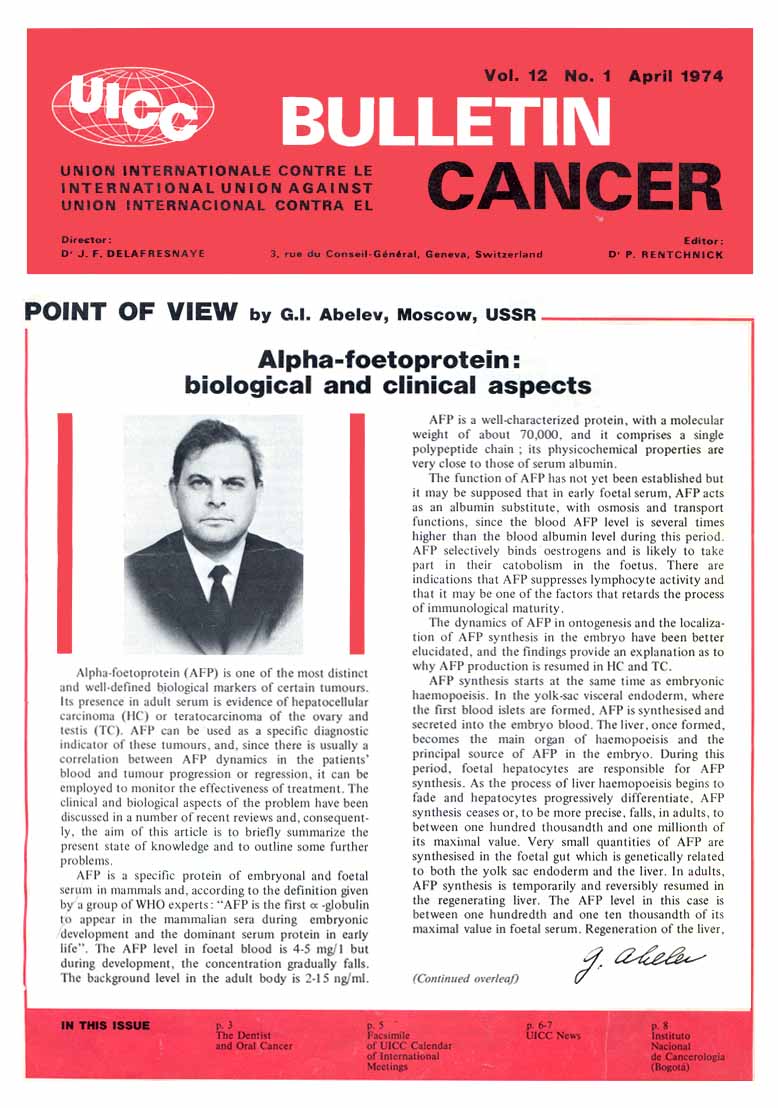